The Hidden Markov Model (HMM) is a state-based statistical model that can be used to represent an individual observation sequence class \(c\). As seen in the diagram below, the rough idea is that each state should correspond to one ‘section’ of the sequence. 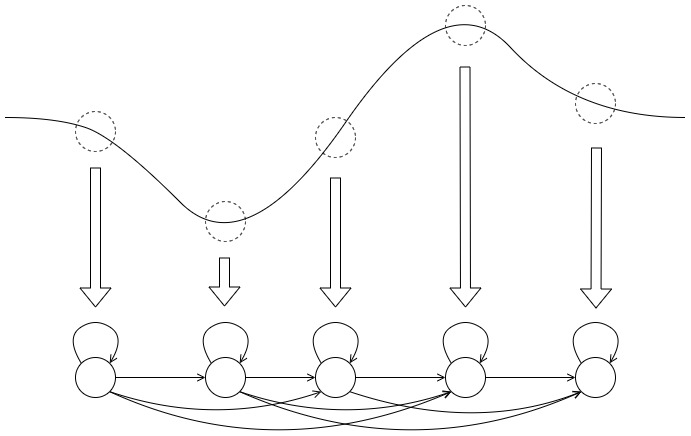 A single HMM is modeled by the HMM class.

The ‘sections’ in the image above are determined by the parameters of the HMM, explained below.

In order to learn these parameters, we must train the HMM on examples that are labeled with the class \(c\) that the HMM models. Denote the HMM that models class \(c\) as \(\lambda_c=(\boldsymbol{\pi}_c, A_c, B_c)\). We can use the Baum-Welch algorithm (an application of the Expectation-Maximization algorithm) to fit \(\lambda_c\) and learn its parameters. This fitting is implemented by the fit() function.

As we usually wish to preserve the natural ordering of time, we normally want to prevent our HMM from transitioning to previous states (this is shown in the figure above). This restriction leads to what known as a left-right HMM, and is the most commonly used type of HMM for sequential modeling. Mathematically, a left-right HMM is defined by an upper-triangular transition matrix.

If we allow transitions to any state at any time, this HMM topology is known as ergodic.

Note: Ergodicity is mathematically defined as having a transition matrix with no non-zero entries. Using the ergodic topology in Sequentia will still permit zero entries in the transition matrix, but will issue a warning stating that those probabilities will not be learned.

Sequentia offers both topologies, specified by a string parameter topology in the HMM constructor that takes values ‘left-right’ or ‘ergodic’.

Note: The likelihood does not account for the fact that a particular observation class may occur more or less frequently than other observation classes. Once an ensemble of HMM objects (represented by a HMMClassifier) is created and configured, this can be accounted for by calculating the joint probability (or un-normalized posterior) \(\mathbb{P}(O, \lambda_c)=\mathbb{P}(O|\lambda_c)\mathbb{P}(\lambda_c)\) and using this score to classify instead. The addition of the prior term \(\mathbb{P}(\lambda_c)\) accounts for some classes occuring more frequently than others.

For more elaborate examples, please have a look at the example notebooks.

Sets a uniform transition matrix according to the topology.

Sets a random transition matrix according to the topology.

Fits the HMM to observation sequences assumed to be labeled as the class that the model represents.

Runs the forward algorithm to calculate the (negative log) likelihood of the model generating an observation sequence.

Multiple HMMs can be combined to form an ensemble multi-class classifier. To classify a new observation sequence \(O'\), this works by:

These steps are summarized in the diagram below. 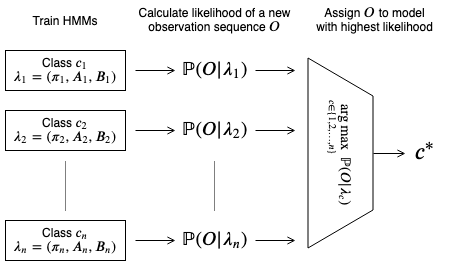 For more elaborate examples, please have a look at the example notebooks.

Fits the ensemble classifier with a collection of HMM objects.

Predicts the label for an observation sequence (or multiple sequences) according to maximum likelihood or posterior scores.

Evaluates the performance of the classifier on a batch of observation sequences and their labels.